Join me March 9, 7:00 PM, at Inkwood NJ to celebrate the release of my new novel Josephine Wins Again. 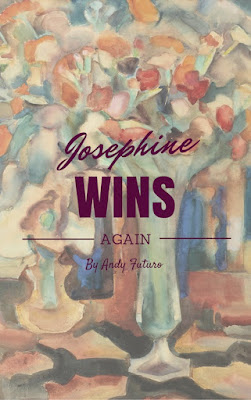 What:
A low-key book launch event. A light reading, opportunities to buy great books and have them signed.

August 16
It is the night of the promotional party for my book, Yoga Wars, and I am frantic. The hardcover copies I ordered never arrived so there are none to give away. The laptop I’ve brought so people can download the eBook for free lies neglected. Attendance is sparse. This weekend—I learned from the regrets posted to my Facebook event page—is also that of the Philly Folk Festival. My chief consolation is that the beer is a hit. At least everyone seems to be having fun.
The party is hosted by my friend McFly, in one of the five conjoined houses he owns/manages/lives in/has some nebulous connection to. I have just moved back to the East Coast from California, and I have no place of my own in Philadelphia. I migrate nomadically between my folks’ house in New Jersey and the couches of friends. McFly is kind to host the party, a nice guy in general, and also self-righteous and shady as hell.

Rooting for the Apocalypse — Chapter 5: Don't forget your credit card