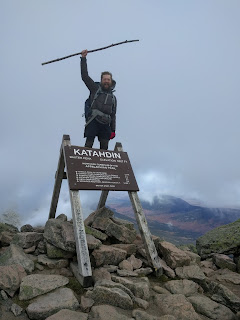 Well, there I am, looking like a crazy person on the summit of Katahdin. Just now noticed my under layer of puffy sticks out like a little fupa. I guess we can't all look like a North Face ad.

It was strange how quickly the end came. We had been so mission-focused for so long, had trained ourselves so well to break an impossible goal into days, that when the night before the summit came, we were ready to hike and totally unprepared for world without hiking. After getting nearly killed in the Whites (and this one is truly with minimal hyperbole), and nearly killed in southern Maine, and nearly killed in Mahoosuc Notch (seriously, google it), Katahdin had never felt further away. But the miles yield to determination. We hiked in the dark, and cold, and rain, and over rocks and boulders and roots and—oh my God the mice. We ate in the dark and the mice ran over our hands and our feet and tried to snatch morsels from our bags. They bounced off the tent and wriggled through bags. They rappelled down the lines of our bear bags and nibbled holes in everything. They shit everywhere. I don't believe there is a single second in a mouse's life that it is not shitting.

Our feet took us over mountains, and worming through caves, and along the shores of rivers and lakes. The scenery astounded, day after day. I ordered a battery for my phone to ensure it could weather the wilderness and capture the granduer of our walk.

And then it ended. We were so unprepared. I was so unprepared. We had hiked every day, woken to sunsets and watched birds frolic in the morning sipping bad coffee and choking down saccharine instant oats. We complained constantly, we were in near constant pain, and we didn't know how good we had it.

The morning of the summit was iffy. We had a day to spare, to wait, to see if the weather would improve. The weather report was unclear, not enough to make the decision for us. We shuffled our feet and discussed. We'd slept poorly the night before. We'd done 55 miles in three days to get there. We were sick with fatigue and ruined bowels. Another hiker, one we'd seen off and on was going to make the attempt, that day.

We did. The nervous energy took hold. Katahdin wasn't the hardest climb, but it was the scariest, with the greatest drops, the most obvious plummets to oblivion, and some goddamn acrobatic demands that I still can't believe we survived. And then we were at the sign, the fabled sign, and we took a thousand pictures and laughed and celebrated (quietly). We walked down the mountain on a different path, one of the easiest but still hard. And it was done.

There is a rudeness to the civilized world evident after living in the woods. Before the trail I saw nature as the backdrop to the suburbs, the human creations prominent and the nature as decor. Now I see the nature before all else. The human trinketry—the roads, the sidewalks, the houses, the poles for telephones and sieved electrons—appears crudely pegged and hammered and sunk. The sidewalk separating a line of trees from the front yard is straight and well set—and still crooked and cracked and so clearly an brief annoyance to the engulfing nature on either side. I had thought the cabins and privies of the trail to be crude invasions, but in fact all of our human invasions are crude and ignorant and blatantly so. Crude, crude, crude, the word pops in when I look around and everything we humans have built.

I took a walk today through a small woods and stopped at a bridge. A heron was there fishing. Cars and people passed by around me. I stayed and watched the heron for an hour. He stopped fishing and looked at me and we held a gaze. I felt like there was something there we both understood. In some small, but meaningful way, I had moved into his world.