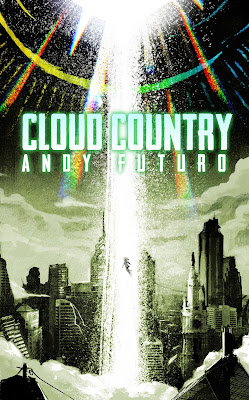 Well, that could’ve gone better. Saru had found the blue-eyed girl alright, but she’d blown up half of Philadelphia in the process. Whoops. Now she was a fugitive, robbed of her implants, relying on her “wits,” hunted by aliens, Gods, and the monstrous spawn of fornicating universes. It was a crap deal, but it wasn’t all bad. She’d stolen a plane, a luxury model with a fully stocked minibar. And she had company, a rogue Gaesporan named John. And there was something strangely liberating about having screwed up so badly you couldn’t really do worse.

I'm pleased to announce the release of the latest book in the Special Sin series, Cloud Country. It was a hell of a time finishing this sucker, a lot of jittered coffee hours smashing my face against the keyboard. Maybe I'll expound on the particular agonies later, but for now, hurrah, hurray, and huzzah.
Labels: books news